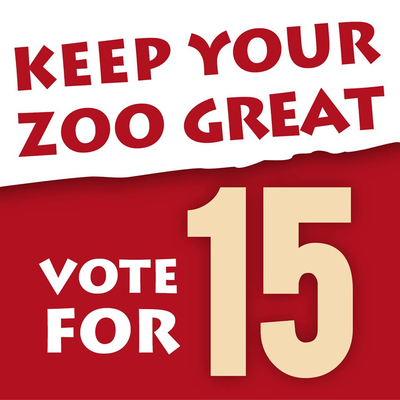 Because Issue 15 passed, a renewal levy would make an owner of a home worth $100,000 would have to pay 21 dollars a year for the next 10 years.  A majority of those against Issue 15 being passed most likely feel that it would be an unnecessary tax to pay. The ultimate goal of passing Issue 15 is to give the Columbus Zoo a revamped look to it, so it stays visually appealing to families going to the zoo and adequate to house the animals.

There are specific areas at the Zoo that have not been redesigned in a long time. The Zoo president Tom Stalf even said a part of the gorilla building was made in 1950. He feels that it’s about time that area gets changed for the better.

Last year Issue 15 did not get the votes to be passed, so supporters were gunning for a different outcome this time.  With the passing of this Issue, $180 million in the next 10 years will be engendered. Director of the Columbus Zoo, Jack Hanna, feels that without the levy it would be impossible to properly update the Zoo. Now the only people that will be affected by the levy passing is people living in Franklin County. Hanna has said that people who pay tax to support the Zoo can come three times a week with half price admission, but some voters may not feel like that’s worth paying what feel like a tax increase for the next ten years. Issue 15 could’ve went either way. The deciding factor was if the voters feel that it would be an additional tax increase. If you didn’t feel like it was then issue 15 is what you voted for, but if you felt like you’d be paying an additional tax then you’re against issue 15.

In the final results from the voting on Tuesday, November 3rd Issue 15 was passed with 76% voting yes for issue 15 and 24% saying no to issue 15. The Columbus zoo will get to renew it’s look with the levy passed.