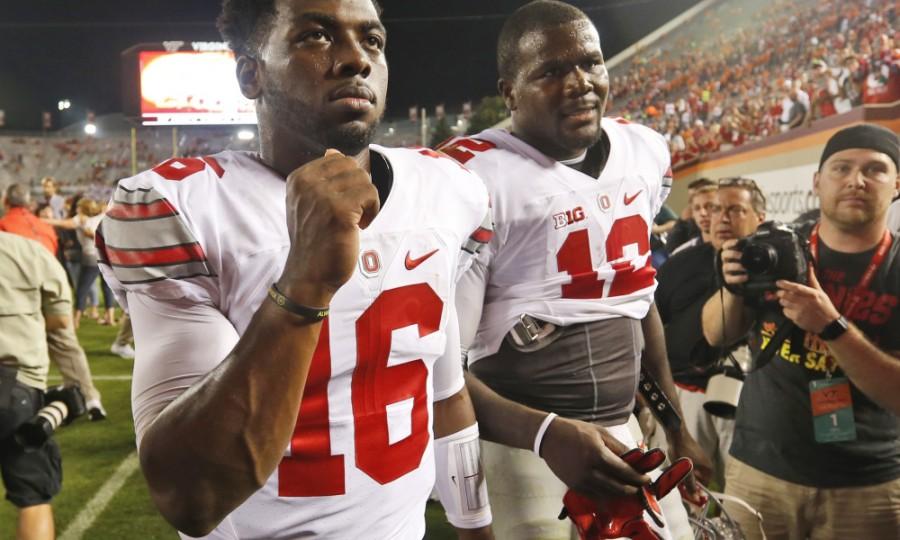 Ohio State’s sophomore quarterback JT Barrett was arrested on Halloween night for an OVI. Barrett, a Heisman candidate last year before breaking his ankle in the final season game against Michigan, bad just gotten his starting spot back the week before. Cardale Jones had started the previous seven games while constantly getting benched for Barrett due to poor play. Barrett’s first game starting he completed 14/18 passes for 223 yards and three touchdowns leading to a 49-7 victory over Rutgers. After the news broke of the arrest, it was reported that Barrett was released to Jones, and that he would be suspended for the next game against Minnesota.

Barrett’s attorney stated that he was attempting to take a heavily intoxicated friend home before getting stopped at the DUI checkpoint. Barrett’s blood- alcohol level was barely over the legal limit, at 0.099, but being 20, the Ohio limit is 0.02. TMZ just recently released a video of the arrest, with Barrett stating that he is the quarterback of OSU and asking if there was anything the officer could do. The officers called him fully cooperative and very polite. He had his license suspended for six months and must pay a $400 fine and attend a three day alcohol education class by February 14 or face jail time.

Barrett’s first game back was Saturday against Illinois. He totaled 150 passing yards, 74 rushing, and two touchdowns en route to a 28-3 victory. After the game, he was interviewed about it.

“What I have to say about that is I am truly sorry for my actions,I know that the main thing about it is I wasn’t thinking really about my position here at Ohio State. I faced the consequences and that’s going to be a long-term thing I’m going to deal with. I’m moving forward. Like I said, I extremely apologize to Buckeye Nation. I never want to hurt Ohio State (with) what it’s done for me as a person and also as a player. It was just a selfish act and that’s it.”