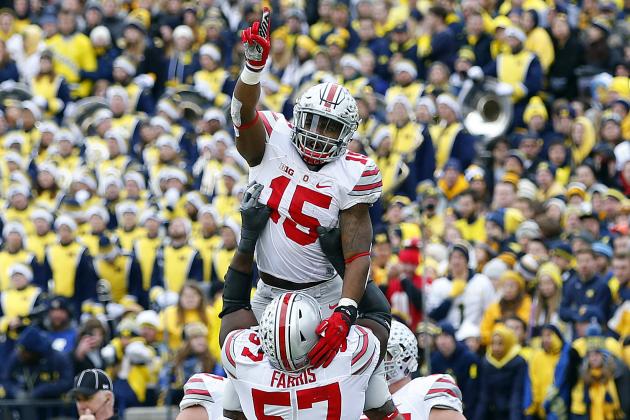 During week 12 of the college football regular season, #3 Ohio State faced it’s best opponent yet in the 9th ranked Michigan State Spartans. The loss broke the Buckeye’s 23 game winning streak. This was Ohio State’s first regular season loss to a Big Ten team in the Urban Meyer era. The last time Michigan State beat Ohio State was in 2013 in the Big Ten championship game, which also broke a 20+ game win streak and kept them out of the BCS title game. The rapid fire offense for Ohio State was nonexistent against the Michigan State defense, with Ohio State gaining only 132 total yards. The game ended with MSU’s kicker, Michael Geiger, making a game winning 41 yard field goal. Zeke Elliott, the team’s Heisman candidate running back, only had 33 yards on 12 carries which broke his fifteen game 100 yard streak. After the game he questioned play calling and expressed his frustrations by saying that it would be his last game in “The Shoe”.

Week 13 was a bounce back game though for Ohio State, playing against their biggest rivals, Michigan. The #8 Buckeyes played at #12 Michigan and took over right out of the gate. Projected #1 overall pick for the 2016 draft, Buckeye defensive end Joey Bosa, injured his former teammate quarterback Jake Rudock on a sack and took him out of the game. Ohio State ran for 369 yards in the game against the fourth ranked run defense in the FBS. Quarterback JT Barrett took nineteen carries for 139 yards and three touchdowns. Barrett threw less times than he ran, completing 9 of 15 for 113 yards and a touchdown. Elliott ran for 214 yards to collect two milestones. This helped Elliott accumulate 1,500 rushing yards for the season to join Archie Griffin as the only Buckeyes with more than one 1,500 yard season. This was also Elliott’s fifth 200 yard game, which tied Eddie George for most as a Buckeye, while passing George for second place on the school’s all time rushing list with 3,812 yards.

The loss to Michigan State dropped Ohio State to eighth place, but the win against Michigan brought them back up to sixth. The team needed to root for Penn State for beat Michigan State, which would have given them a ride to the Big Ten championship game, but it didn’t happen. They needed one of the top four teams to lose in an upset in their conference championship game for a chance to jump at least two spots into the College Football Playoffs. Since Ohio State did not make it into the playoffs due to the conference championship results, they will now play #8 Notre Dame in the Fiesta Bowl.