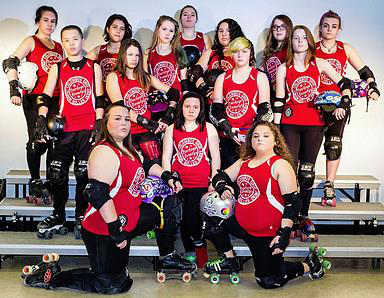 We’re told not to hit our friends, but in roller derby that’s the name of the game – with a few rules. Columbus, Ohio’s first junior roller derby team, The Buckeye Beautyz competes in the Junior Roller Derby Association (JRDA), which is a co-ed league that started its 2016 season on March 19 in a bout against the Dayton Junior Gems at Hara’s East Hall.

While the off-season may be a time for some athletes to rest, the Beautyz spent the long and demanding time of year learning new techniques and perfecting basic skills in order to get back to the top. Last season the Beautyz came in fifth in the open division, which consists of five countries and hundreds of leagues. Wall drills and offensive drills like “the box” require intentional practice to master. The box occurs when two blockers go forward and two blockers go backward.  The backward-moving blockers turn to stump the opposing team’s jammer. This means that any way he or she turns, the jammer has at least one blocker skating his or her way at all times. Because of all of the rules the players have to follow, in order to avoid penalties and foul outs, these drills require a lot of practice.

With the off-season ending and a new season beginning, the Beautyz had to prepare a new season roster. Two of the Beautyz, Zyren  #137 and Wreck-Her-Beck #007, turned 18 and aged out this season. A new wave of fresh meat fought to claim spots on the 2016 roster as no one’s spot was safe. Every player, including the varsity players, must prove that he or she deserves a spot on the roster based on attitude, dedication, attendance and skills. There can be up to 14 skaters on a roster for a game, but there are a total of 19 skaters on the Buckeye Beautyz.

The long haul of the off season has paid off. The Beautyz skated off their first game with a win: the Buckeye Beautyz scored 278, and the Junior Gems scored 171. With countless apex jumps, grand slams and a couple of foul outs, it’s no surprise that the point totals are so high. At the end of every game the teams announce an MVP blocker and jammers. The Beautyz chose #777 The Crucifier for MVP blocker and #26 Punk-R-Ellie for MVP jammer. The Dayton Junior Gems chose #5 Teenie Leenie for MVP blocker and #19 Blur  for MVP jammer.

Check out the Beautyz site for more information about attending a bout at Central Ohio Roller Hockey in Grandview Heights.