Take a Bite Out of Pancake Day! 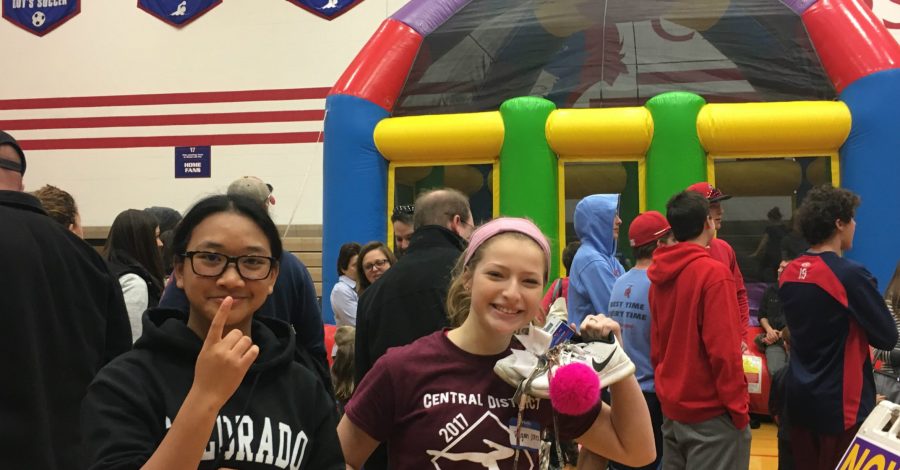 Take a Bite Out of Pancake Day!: Regan Jones and Sarah Anderman pose in front of the bounce house. The rule is if you have shoes you can't bounce so, Regan took hers off in order to have some fun!

The event benefits the athletic departments of both Worthington High Schools. Students who participate in athletics sell tickets prior to the event for $5.00 although, they can also be bought at the door for $6. This year it was hosted at Thomas Worthington and went from 8:00 a.m. to 2:00 p.m.

Worthington’s Pancake Day has a variety of activities each year, something for all ages. This year included a silent auction, face painting, SuperGames and the highlight of the event, the pancake breakfast.

While many people come for the “Fun and food,” as Regan Jones a Thomas Worthington student did, others come with their families and friends in order to spend time with them.

People trickled in throughout the morning to get their pancakes. Volunteers stood by distributing pancakes and sausages to the crowd. After, receiving the food people sat down with their friends and families. As people ate there were many performances. A jazz band played for the audience, a magician performed magic, cheerleaders cheered and jump ropers from Ohio State did impressive tricks.

Olivia Judy, a Worthington Kilbourne softball pitcher, came with her softball team. She stayed to watch a few performances but, jokingly claimed she usually stays for “as long as it takes to eat”.

As Olivia watched performances in the auxiliary gym, individuals of varying ages were in the main gym jumping in Supergames’ bounce houses and having an overall good time. In the main gym, there were young children going up and down the inflatable slide to teenagers racing through the obstacle course. Numerous people that attended claimed Supergames is their favorite part.

No matter who you are Worthington Pancake day has activities that appeal to everyone. In conclusion, you should go to Pancake day because #ItsWorthIt