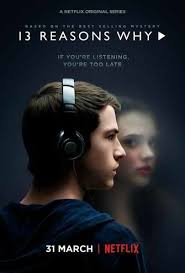 A NETFLIX original show and previously a book, 13 Reasons Why is what every high schooler seems to be watching. But, some experts are arguing nobody should be watching it.

This single season, 13 episode show gives 13 reasons why a girl, Hannah Baker decided to commit suicide. The story begins with Clay Jensen, a former friend of Hannah’s, receiving a box containing 7 cassette tapes and a map. During the first tape, the listener is told she holds each of them responsible in some way for her death and that the tapes will explain why. The reasons being anything from starting rumors to sexual assault. After listening, each person must give the tapes to the next person on the list. If anybody fails to pass them along, a copy of the recordings will be made public.

The intent of making the show was to bring awareness to major issues, specifically mental health and the issue of suicide. A Thomas Worthington student has said,  “I think it’s good for teenagers to see what’s really happening”. This is a common opinion between viewers of the show. But, mental health experts have a different view, they’re saying it’s too graphic and could pose health risks for certain people.

In the 13 episodes, rape scenes were shown and Hannah Baker’s suicide was clearly depicted in the final episode. These scenes arguably aren’t the best thing for someone to watch.

A ninth grader from Thomas Worthington gave an opinion on the show that some might agree with, she said: “As much as I loved the show they didn’t have to make the suicide so graphic.” Another Thomas Worthington Student stated a different view,”It’s real world, if some people watch it, it could be really bad and be triggering but, you can’t really shelter everyone from that”.

Although, it’s been argued that the portrayal of the suicide had more of a negative effect than a positive one. Generally, the way media portrays mental health issues and suicide is inaccurate and can reinforce bad stereotypes. The main concern of Hannah Baker’s suicide being shown is “suicide contagion”. This exists when “there’s an increase in suicides after being exposed to the suicidal behavior of others.” It’s caused by exposure to graphic, highly detailed or simplified portrayals of suicide it can result in copycat suicide attempts and deaths by suicide, particularly in teens and young adults.

In the end, it’s good to keep in mind that this show has certain themes and scenes that specific viewers may not handle very well.  It’s recommended parents discuss the show with their children and talk about the themes encompassed within it.