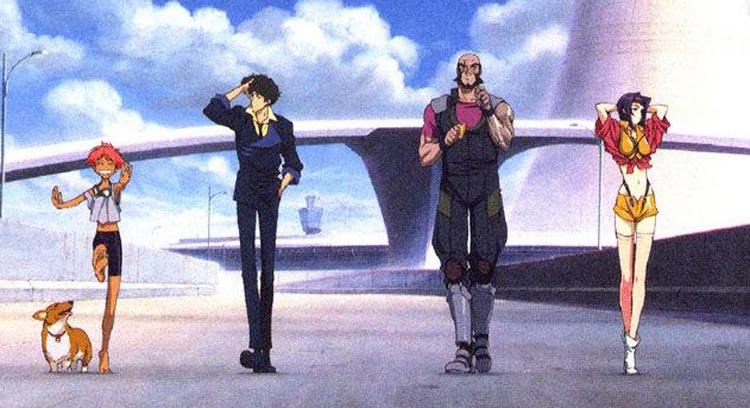 I know what you’re thinking, “Anime’s nothing but overly exaggerated characters with really weird haircuts who scream at the top of their lungs to gain really weird superpowers” and, being honest, I completely understand that whole assumption,. The only anime seen or heard of by a good majority of non-anime fans are anime like Dragon Ball Z and/or Naruto…but believe me when I say that that’s certainly NOT the anime you’re gonna see here.

The anime discussed here will be ones that not a lot of non anime fans have heard of/ones that they probably should watch if there’s ever a day where they try to get into anime (movies and TV shows will be included) and all i’ll really be doing is giving the basic story of the anime in question because I’M NOT GONNA SPOIL ANYTHING AND YOU CAN’T MAKE ME!!!!!!! (and I’ll also be including the openings to them if there are any) So, without further ado, let’s begin!

So, a vicious samurai with a glorious Afro (who also happens to be NAMED Afro) voiced by Samuel L. Jackson is on a quest to both avenge his father by murdering the equally  vicious gunslinger Justice and gain the number one headband from him becoming a godlike warrior in the process, this is basically the main overall story of the series Afro Samurai, with it’s awesome characters, awesome character development, brutal fight scenes, MAJESTIC animation, and a score composed by RZA from Wu-Tang Clan….this is a damn near perfect anime..with my only problem with it being that it has far too few episodes and the main character is one of those almost silent protagonists

Welcome to the corrupt town of Ergastulum, essentially ruled by drug dealers, gangsters, prostitutes, and corrupt cops, I can see what you’re thinking “How do they keep the town running?” simple, getting two gents who do jobs that the cops can’t do, called handymen, snarky ladies man Worick Arcangelo, and his ludicrously intimidating super enhanced partially deaf friend Nicolas Brown, together these two  go around doing things like, stopping drug rings, massacring a crime syndicate among numerous other odd jobs……oh, before I end this, I ought to say that this is a pretty gritty series so..I guess I should say that it’s not for the faint of heart

How to describe this anime.without spoiling it……………well…………self proclaimed mad scientist Rintarou Okabe discovers time travel through a microwave, and hijinks ensue along with the world’s longest and loopiest emotional roller coaster going about 5 times the speed of the Top Thrill Dragster……NEXT!!!

The only movie on this list…and what a movie it is…basically, it’s Inception before Inception came out, only miles better with much more surreal imagery, and it’s a murder mystery, along with the fact that it’s a bloody wonder to look at, WHAT MORE CAN I SAY

Ok, i’m not going to go over the plot, considering that describing it would most likely take me from here until 2020 with how complex, ridiculous, and OH SO FLAMBOYANT it can be, and i’d also have to go into spoilers for a good majority of its previous arc Phantom Blood………..so i’m just gonna leave you with the opening and see what you think

So, two people exit two separate elevators into a bar called the Quindecim, at the center of said bar, stands a man named Decim, who informs the two people of their situations………he then informs them that to escape..they must play a game where the stakes are the lives of one or the other…..this is Death Parade……AND IT’S BRILLIANT!!!!! from the animation, to the music, to the characters/staff of the Quindecim……..IT’S JUST BLOODY BRILLIANT!!!  I’d definitely recommend giving it a watch sometime soon because……………well, it really bears repeating…anyways, HERE’S THE (incredibly deceitful) OPENING

In Samurai era japan (mixed with a bit of modern rap elements in) 3 people, tea shop waitress Fuu, mysterious rogue Mugen, and young ronin named Jin are on a quest to find the “Samurai who smells of sunflowers”….if I can describe the anime as a whole? It’s a Shinichiro Watanabe project so it’s bound to be a blend of East and West elements involving some sort of cowboy gangster esque episodes with some top quality animation………..is that a bad thing, NO, is it good, YES!! Should you watch it….really depends on your taste in entertainment

I’m going to ask you a question, what would it be like to be an all powerful super hero?

This anime answers the question…and what is the answer? Pretty friggin boring actually, in this parody of common anime tropes, we see Saitama, the show’s main protagonist, facing god like beings with…quite the nonchalance…here, lemme show you some examples of how his fights usually go

https://www.youtube.com/watch?v=u0gNqxxXf4I a.k.a THERE’S A REASON WHY THEY CALL HIM ONE PUNCH MAN!!

see my point (also, I would’ve found a clip in English, but there are just one too many a holes on the internet who whine about English dubs to the point where finding clips of them are far and few in between)

Welcome to the Desert planet of Gunsmoke, where bounty hunters, gunslingers, assassins and cowboys roam free, with the most dangerous of all of them being red duster coat wearing 60 billion double dollar humanoid typhoon Vash the Stampede, this is Trigun..and trust me, it’s not AS serious as it sounds, but it does have it’s moments………..so, lemme just list two things that give Trigun this spot (as it goes with all animethe from 2 to 1)

1.The main character, the aforementioned Vash the Stampede…at the beginning of the show, you hear all this talk of him being the worlds most dangerous man, after all, the bounty on his head is worth SIXTY BILLION DOUBLE DOLLARS!!!…and I just have to say that, although the carpet is pulled out from under the viewer with the force of a railgun firing at the speed of sound, that doesn’t mean that Vash has his moments of seriousness

2.The music, GOOD GOD THE MUSIC!!!, from Vash’s theme song Big Bluff, to the beaaaaaaautiful Philosophy in a Teacup, to it’s ending song Kaze Wa Mirai Ni Fuku, to the greatest saxophone solo ever put to screen with Permanent Vacation, to the magnificent Fools Paradise OOOOOOOOOOOOHHHHH IT’S SO GOOD!!! you just gotta listen to it

Now, this is essentially Pulp Fiction in Prohibition era except it involves the Devil, the elixir of immortality, some form of alchemy, the Mafia, and a monster murder mystery set on a train called the Flying Pussyfoot (yes really…let me start this off by saying……this is one of the best shows I’ve seen ever, and like Trigun, I may as well go over 2 things that make give Baccano the number 2 spot…..oh it’s like I need to tell you that IT’S THE GORRAM MUSIC!!! Perfectly capturing the 1930’s with some Big Band numbers alongside some (oddly 70’s) funk, some blues, and even some lounge music, the Baccano soundtrack is awesome, and Number 2………ESPECIALLY NUMBER 2 are the characters…where…to….start?…..The two highly eccentricBonnie and Clyde esque figures Isaac Dian and Miria Harvent? The young Mafia up and comer Firo Prochainezo? His father figure/mentor Maiza Avaro? The Gandor brothers Keith, Berga, and Luck? The dastardly Szilard Quates? his mysterious assistant Ennis? The….timid Lua Klein? Her magnificently sadistic boyfriend (and one of my favorite characters) Ladd Russo? My other favorite character, the equally sadistic and charming Claire Stanfield? Mute assassin Chane Laforet? Demolition enthusiast Nice (pronounced Niece) Holystone? her….timid(?) boyfriend(?) Jacuzzi Splot? The young and a bit too innocent Eve Genoard? Her jerk brother Dallas (who happens to go missing around the beginning of the series though we don’t know how), mysterious child(?) Czeslaw (pronounced Chez-law) Meyer? aaaaaaaaaahhhh screw it..I love em all……………oh…..the intro…the beautiful..beautiful intro..accompanied by the song Guns and Roses..the intro basically introduces the characters in damn near the exact order that I introduced them…all except for my boy Claire…where is he you ask? WATCH THE GORRAM SHOW AND FIND OUT!!!

With a main character voiced by the magnificent Steve Blum?!?!

Cowboy Bebop is a show set in the year 2071 about a group bounty hunters, the cool, collected snarker Spike Spiegel, ex cop Jet Black, the dictionary definition of a femme fatale Faye Valentine, Oddball hacker Radical Edward/Edward Wong Hau Pepelu Tivrusky IV/Francois Appledelhi, and over intelligent dog Ein……….that’s all i’m gonna say, because as I mentioned in the beginning…………….NO!!!!!!!!!!!!!!! SPOOOOOOOOOOOOIIIIIIIIILLLLLLLLLEEEEERS!!!!!!!!!!

Anywho………you know that thing I’ve been doing for the past two entries, mentioning the fact that the 2 things that make them good are the music and or the character (s)…….well…let me be the one to tell you that COWBOY BEBOP HAS THOSE TWO IN SO MANY SPADES, with the music composed by Yoko Kanno and jazz band The Seatbelts, Cowboy Bebop really wouldn’t be what it is without it’s so glorious soundtrack..that..and it wouldn’t be what it is without it’s MAGNIFICENTLY MAGNIFICENT animation, and award worthy character development!! Put this in the right hands and it could make an award winning TV series, or even a movie!! It’s just……………….wow………I mean, I wish I could go a bit more into detail on it, but i’m so worried about spoiling it for the readers soo

You’re gonna carry that weight, so see you space cowboy