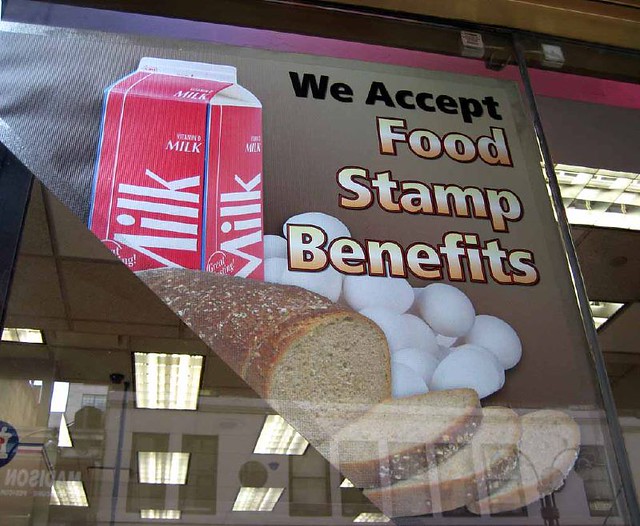 Taken in 2007, a grocery store hangs up a sign in their windows saying they accept food stamp benefits. If Trump’s new policy goes into effect, many Americans will be unable to use their food stamps to buy food in grocery stores.

Over 60,000 Ohioans could lose their SNAP benefits if a new policy change proposed by the

Trump administration goes into effect. After a 60-day public comment period, which ended September 23 with over 6,000 comments, a final regulation will be issued. Ohio is among the 42 states that this proposal will hurt.

In late July, the U.S. Department of Agriculture released a proposed rule that would “create a clearer and more consistent nationwide policy that ensures categorical eligibility is extended only to households that have sufficiently demonstrated eligibility”.

The proposal would allow states to no longer deem people eligible for food stamps because they qualify for other government assistance.

The Trump administration claims the change would close a loophole that allows ineligible Americans to receive food stamps, but Ohio Democrats argue that the plan will only hurt the needy and most vulnerable.

“This rule is yet another example of the Trump Administration ignoring congressional intent and proposing a self-initiated, flawed rule that will take food assistance away from millions of Americans, disproportionately affecting children, seniors, and working families,” said Ohio Sen. Sherrod Brown in a letter to U.S. Department of Agriculture Secretary Sam Perdue.

The USDA released a report in July stating that an estimated 9 percent of currently-participating SNAP households, around 3.1 million individuals, will be cut from the SNAP program under the proposed rule. The cut will save taxpayers approximately 9.3 billion dollars over the next 5 years.

SNAP’s current system helps low-income families who work but struggle to buy food after paying other expenses such as housing and childcare. The program automatically qualifies children to receive free or reduced-price school lunches, but with the new proposal, their eligibility for the program will be taken away.

Of the 1.8 million students in Ohio schools, around 700,000 students rely on food stamps to provide free or reduced-price school lunch according to data from the Department of Ohio Education.

In Franklin County alone, there are 147,000 active members in the SNAP program, 73,000 of which are children as of July 2019 according to a caseload summary report by the Ohio Department of Job and Family Services.

SNAP benefits allow students to qualify for and use the reduced-price lunch program. While breakfast is $1.60, and lunch is up to $3.00, reduced prices required students to pay only $0.30 for breakfast and $0.40 for lunch.

In a joint statement, Ohio representatives Joyce Beatty, Marcia Fudge, Marcy Kaptur, and Tim Ryan urged Governor Mike DeWine to reject the USDA proposed rule, stating that “the treatment of our poor and most vulnerable citizens in this way is inhumane and irresponsible.”