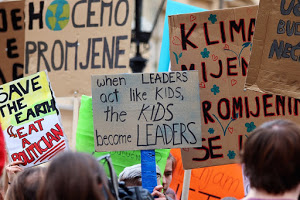 Hundreds of young students take to the streets of Croatia and take part in the global youth climate strike- March 15, 2019

Hundreds of students seeking action cut class to participate in the Youth Climate Strike on the steps of the Ohio Statehouse on Friday, September 20th.

More than 400 students, teachers, and protestors participated in the Global Climate Strike in Columbus as part of a global climate  change protest that involved hundreds of thousands more around the world. Columbus protesters marched to the offices of Senators Sherrod Brown and Rob Portman to demand government action.

“I think that a lot of times the conversation about climate change doesn’t have the urgency that it needs. I think that we want to leave everyone feeling hopeful and empowered, but we also want to remind them that this is a crisis and we want government action,” (Dispatch) said 16-year old Catherine Adams, a student who attends Westerville North Highschool.

Students and teachers gave speeches, sang songs and recited poems before marching down, with written demands, to the offices of Senators Sherrod Brown and Rob Portman. The list of demands included things such as a strong commitment to the Green New Deal and divestment from fossil fuels. Protestors were turned away from Portman’s office but were able to deliver their demands to Brown.

“I think people are going to leave feeling really energized and talk to their friends and their co-workers about it and that is also one of the goals, to make it a household topic,”(The Lantern) said Sophie Roome, a strike mentor, who despite being turned away believes her and the rest of the strikers had a big impact on their community.

One of the speakers, Michael Charles, Ohio State Ph.D. student in chemical engineering and a member of the Navajo nation, gave a speech on how damaging the effects of climate change have been on his community and indeginous people in general.

“Our identities are tied to the land and through our languages and through the ecological knowledge, which informs our daily lifestyles, so as the climate changes, our identities change,” Charles said during the speech. “Back home we are experiencing unprecedented drought impacting our traditional way of farming and herding, and we’re still fighting against the injustice of toxic water from the Gold King mine spill, which leaked lead and arsenic into the Navajo Watershed.”(The Lantern)