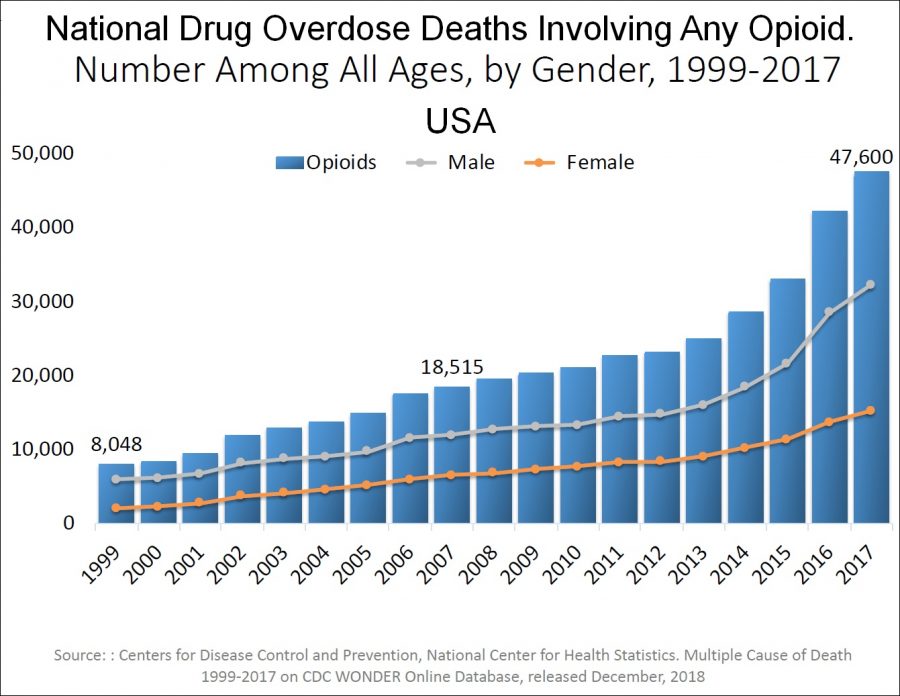 Timeline of deaths caused by opioid epidemic in the U.S. 1997-2017 according to the CDC.

The midwest is dealing with the worst drug crisis in American history– and they’re holding pharmaceutical companies responsible.

In 2018 in the US, 10.3 million people misused prescription opioids, 2 million people had an opioid use disorder, and 47,600 people died from overdosing on opioids according to The U.S. Department of Health and Human Services.

In the wake of one of the most devastating years for opioid use in American history, over 2,500 counties, cities, Native American Territories, individuals, and groups are suing three major drugmakers for their role in the opioid crisis, citing the “failure” of pharmaceutical companies to take action in the face of the crisis.

On Monday October 21st, the trial, consisting of these thousands of separate lawsuits, went before a judge in Cleveland. It was called the most complex in American history.

Five separate drugmakers, including Purdue Pharma, have already settled– some for millions of dollars. Johnson & Johnson in particular has been ordered to pay $572 million to Oklahoma. The money is to be used to address the opioid crisis according to the state’s plan (although Johnson & Johnson has said they will appeal.)

The two counties leading the trial, Cuyahoga and Summit, are from Ohio. Ohio is one of the states that has been hit the hardest by the opioid epidemic, trailing only West Virginia in both deaths and prescriptions as of 2017.

Although opioid prescriptions have slowed, their effects are still devastating. One hospital in Cleveland has dealt with 46 overdoses just on their grounds in the last 18 months, as reported by the New York Times.

Emma Ruiz, a teacher at Thomas Worthington High School in Worthington, OH, has also witnessed the troubling effects of the opioid crisis.

“We’ve been trained how to administer Narcan,” she said, pulling up a powerpoint detailing the symptoms of an overdose. “I’ve never seen [Narcan], but I know it’s in the building and accessible, should it be needed.”

Reagan Macerollo is a student at Thomas Worthington, and has also noticed the effects of the opioid epidemic in the news. “I don’t know about Worthington specifically, but I know it’s a big problem in Ohio.”

While she doesn’t know anyone whose lives have been specifically impacted by opioids, she “knows a few people who have been prescribed them as painkillers.” Incidentally, teens and young adults are at an increased risk for misusing opioids after receiving a legitimate prescription. There is also evidence that opioids are being overprescribed, and used for issues that could be solved without them.

What was Macerollo’s perception on opioids as a drug?

“From what I’ve heard, they seem highly addictive. Once you start, it’s really hard to stop using them.”