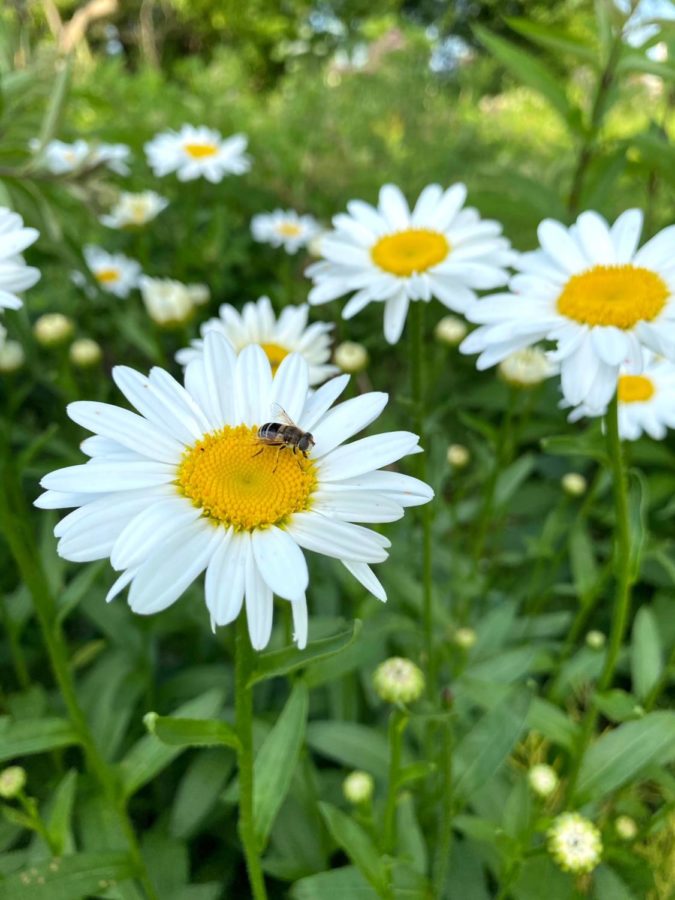 A honey bee enjoying some local nectar at Perry Park.

There are currently 21 members in the TWHS Gardening Club and they are open to anyone who wants to join. The club meets every Tuesday after school. So far, they have met in the library on days that are cold to discuss the plans, and on warmer days they have worked on cleaning up the courtyard and the greenhouse.

After receiving feedback from staff and students at the school, the club has decided to plant flowers, trees, and bushes that are native to Ohio. This includes “cardinal flowers, milkweed, black-eyed susans and many more.”

In addition to the native plants, the cafeteria workers and employees at TWHS have requested vegetables and herbs. So, the gardeners plan to plant “squash, corn, and a variety of herbs” as well.

Members of the club have done extensive research on these native plants and their necessities in order to map out the courtyard in a strategic way. “There’s a small stone wall and it blocks off a medium size rectangle. I plan on using that for a productive garden. The rest of the space is going to be the native plants and benches, ” says Howard.

One of the original members of the club is Ash Learn, who is working in the courtyard during school hours as a part of a Delaware Area Career Center program. They are a second-year DACC student in the Wildlife and Natural Resources program, which teaches a diverse range of plants, trees, animals, insects, and more. Learn says that through DACC, they have received “several accreditations from professionals which have brought [them] to a high level of understanding in natural resource management.” Learn’s experience has been a big help in deciding which plants to choose and where to plant them.

The Gardening Club’s goal is to make the courtyard more welcoming by adding more seating and some decor. The Boy Scouts have generously donated four more benches, and they are working on creating a mural. The mural will be designed and painted by the club members, but they are open to any further suggestions for the improvement of the courtyard.

The club has recently received a sponsorship from Walmart which will help them buy plants and decor. In order to raise extra money for the equipment and other plants, the club members are considering selling custom-made pins. However, most of the tools that will be used are contributed by the club members themselves.

After the senior courtyard has been completed, the Gardening club hopes to revamp the art courtyard as well. They plan on keeping the art that is already there and keeping the four-season theme. According to Howard, “there is also the greenhouse and an outside garden behind the football field that needs love.”