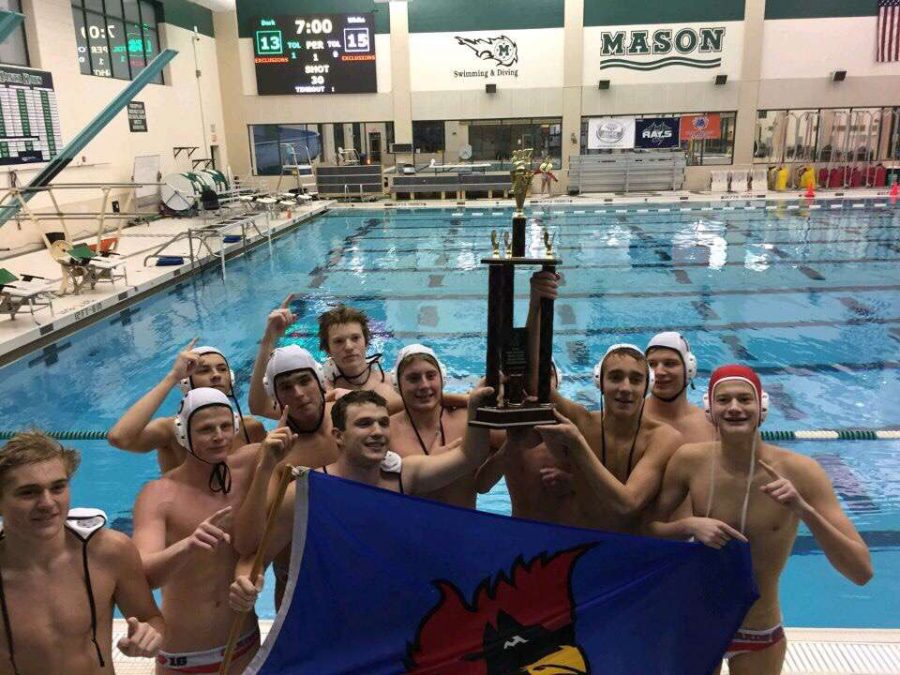 Members of the Boys Water Polo team hold up their trophy for winning states.

On October 28th, Thomas Worthington’s Boys Water Polo team won the first state title since 2004! They played an intense final game against St.Charles. During the first quarter of finals, they were down 6-1 but gained momentum throughout the remainder of the game and brought the score to 11-11, forcing the game into overtime. Taylor Weinsz, a senior and starter, scored a goal that put Thomas Worthington in the lead with a score of 14-13.  Parker Jones, a senior, solidified the win with a goal from almost half pool! The game ended with a score of 15-13 and the Water Polo team as 2017 State Champions! This was a successful season overall for the Water Polo team, with a record of 32-9, states was the perfect end to their season.

Rick Yurich, when asked how it feels to be the coach of state champions he said, “It feels great! The team accomplished their goal and it validates all the hard work everyone put into the past few seasons. The boys on this team can always remember and be proud of that.”

With 11 seniors making up a large majority of their team they knew this would be their year. Four of the seniors, Jack King, Taylor Weinsz, Brendon Zurovchak and goalie Owen Roesch, were on the All-Ohio first team. Losing many starters and key players will have a detrimental impact on the team.

Colin Terrien, a freshman on the team this year said “Loosing 11 seniors will definitely slow us down. We had three of the best field players and best goalie in Ohio. Next year will be a rebuilding year. We will practice hard and develop our new team.”

Although they are losing 11 seniors, the team holds high hopes for next season. The upcoming season is going to be a season of rebuilding and a lot of hard work according to many of the players.

Kevin St. Pierre, a first-year player on the team said, “I think the next few years will be about rebuilding. Our current sophomores will be the key players next year and some of the freshmen will have to fill in some key roles if we want to bounce back to where we were this year. A lot of hard work is on the way.”

Winning states was the highlight of the season for the Boys Water Polo team. With effort and lots of hard work put in upcoming seasons, they expect great things to come.

As Ethan Armitage stated, “I think it will be challenging for a lot of the underclassmen but they’re up for the challenge and I know the team as a whole will be the hardest working team in Ohio.”

If you want a picture to show with your comment, go get a gravatar.