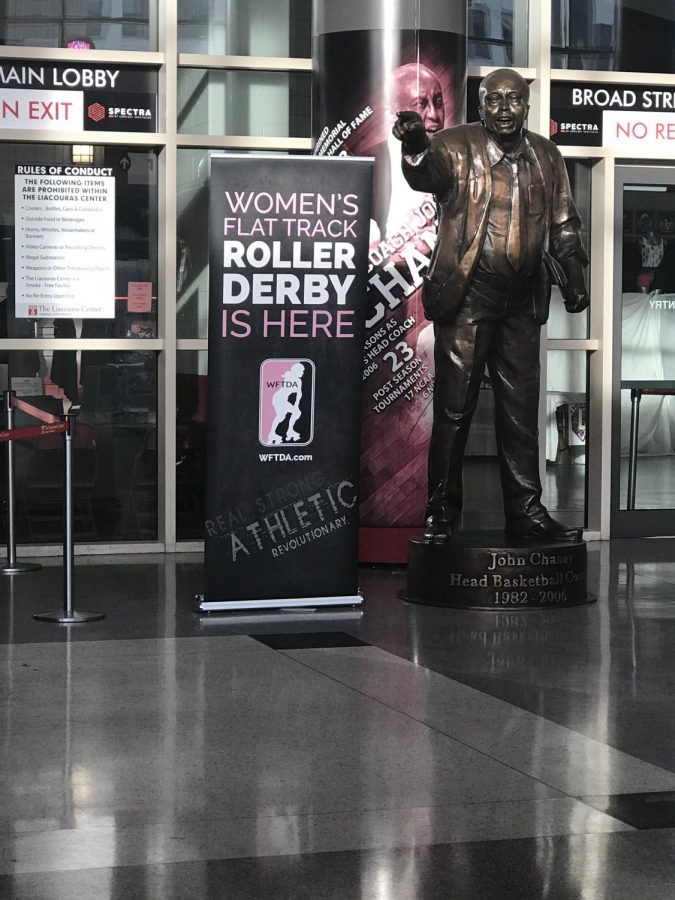 This is a sign that was displayed at the WFTDA International Championships.

Flat track roller derby is a fast-paced contact team sport that requires speed, strategy, and athleticism. The flat track version of the sport evolved in 2001, and has quickly grown to encompass more than 400 leagues worldwide. This is partly due to the ease of setting up a flat track. This can be done on any flat surface that is suitable for skating, such as skating rinks, basketball courts, parking lots, and even airplane hangars. This greatly reduces the capital needed to start up a roller derby league, and allows small groups of people to get a fledgling league off the ground. The DIY spirit that drives the sport allows roller derby leagues to create their own unique identities and adapt their structures to reflect their local communities

On November 3-5, 2017, in Philadelphia, Pennsylvania, the WFTDA (Women’s Flat Track Derby Association) International Championship where the top ten teams in the world compete for The Hydra. The Hydra is a trophy awarded annually to the #1 women’s flat track roller derby team in the world. The Hydra is named in honor of Hydra, a founding member of the WFTDA and the first president of the association. The Current WFTDA champions are the Victorian Roller Derby League.

Roller Derby has become more modern in the past couple of months. The WFTDA has signed a contract with ESPN2 to air the international playoffs in Philadelphia, Pennsylvania on November 5. “Women’s flat track roller derby is a dynamic, revolutionary sport that has been developed by athletes and countless amazing volunteers across several continents,” WFTDA Chief Media Officer Erica Vanstone says. “The WFTDA has worked hard to develop action-packed, high-quality broadcasts of our top-level games for roller derby fans around the globe, and the opportunity to work with ESPN allows us to continue to share this exciting sport with thousands of viewers across the nation.” They moved from ESPN3 to ESPN2 is an American basic cable and satellite television network and you can also watch basic or online through the ESPN app. Then ESPN is an online-only streaming channel that can only be watched via the ESPN app.

Roller Derby has developed and evolved a lot over time. More people are learning about it and becoming more interested in it, which is what is helping the sport develop more and become more popular and modern to lots of different people. Many sources say that in the 2020 Olympics roller derby will be included.  People think that roller derby coming to the Olympics will increase the number of viewers.