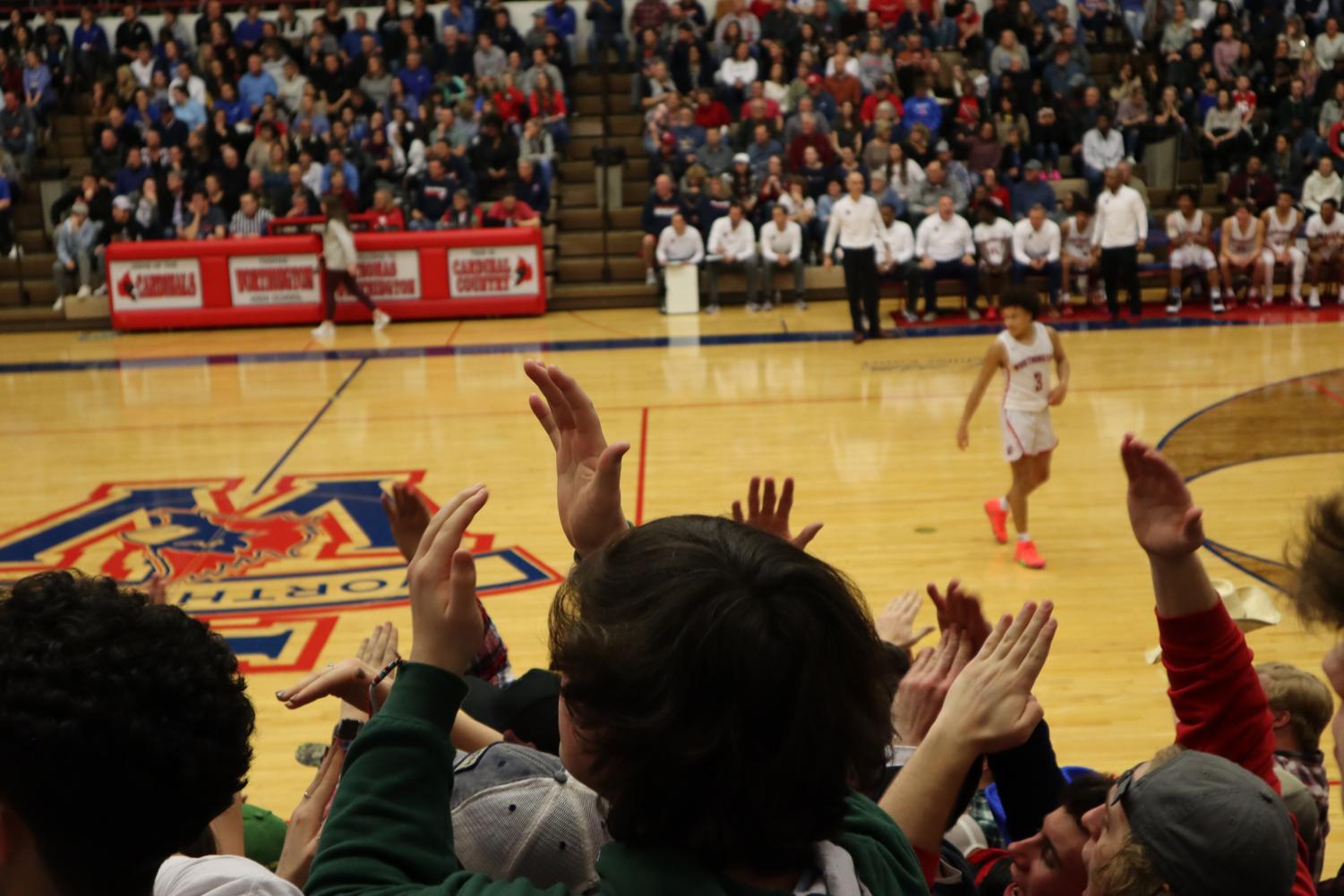 On Friday, January 10th, the Thomas Worthington (TWHS) boys basketball team won the 25th annual rivalry game against Worthington Kilbourne High School (WKHS) with a final score of 66-35. The 993 district tournament marks when the two Worthington schools first started playing each other. Currently, the series record for wins is 18 Cards and the other 7 Wolves. The first five annual games from 1993-2009, all won by the Cardinals, marked the longest winning streak.

This Worthington showdown was highly anticipated, the gym was packed with everyone from students to community members. Before the big rivalry game, both teams had winning streaks so the game determined which streak would be broken. The Cards started off with an early lead and by the end of the 2nd quarter the Cards lead with 28 points and Wolves had 11 points. At the end of the 4th quarter, the Thomas student section could be heard chanting “Just like football”, in reference to the football rivalry game WKHS lost earlier that school year. Students stormed the court to celebrate the victory.

Ian Schupp, a junior and key player on the WKHS team said, “I was obviously unhappy with the results of the game, I thought we could’ve performed a lot better and we did not execute…especially on offense. Next time we play TWHS I believe it will be a much closer game.”

For the entirety of the game, the Wolves trailed the Cardinals which was partially due to the shooting skills the team is currently working on. However, the Wolves have overall good transitions and still had various impressive moments throughout the game. Ian Schupp, who led the team with 13 points in the game, had an impressive alley-oop in the third quarter that sent the Kilbourne student section wild. Mitchell Tomasek, a junior that is First Team All-American punter for football as well as a starter on the basketball team, had 7 points in the game being the second most point scorer and had some powerful blocks that prevented Thomas from scoring more. Notable players on the team include Juniors Travis Mecklenburg, who just returned in October from an ACL tear, and Cayden Dougherty along with sophomore Ayden Parsons.

Jacob Suncire, a senior at TWHS and a member of both the football and basketball team said, “The bond we have has contributed to the team’s success this season. We are all pretty good friends so that helps carry us to success.”

Thomas is also a team that is strongly dominated by juniors and underclassmen. Their fast style of play and team chemistry that they’ve been working on has played a big part in their success this season. Jalen Sullinger, a junior at TWHS and the point guard of the team, led the way with 16 points, three rebounds, and three assists while controlling the tempo of the game all night.  In the second quarter, Sullinger hit two impressive back-to-back threes which increased the Cardinals’ first-half lead to 17. Tyrese Hughey, Isaac Settles, Maurice Collins, and Omari Effiong are among the juniors on the team that are notable. Although heavily junior dominated, Landon Ward, a senior, helped Thomas jumped out to an early 12-2 lead with a 3-point shot in the 1st quarter.

At the end of the night, the Cards athleticism and teamwork helped them keep their lead. Both teams are at a different stage at this point in the season, Thomas has gained strong players, including Tyrese Hughey, Omari Effiong and Joey Zalewski, while Kilbourne’s leading scorer, Zach Wilson, graduated last year. However, these heavily junior dominated teams have a lot in store for them the rest of this season and in the upcoming season.